Order now
BACK TO Testing Locations

Researching your genealogy can be fascinating but the huge variety of DNA ancestry tests available can make it a bewildering process. In this guide we aim to help you navigate the assortment of DNA tests and make the right choice for you.

There are 5 common types of DNA ancestry products available and each will tell you something different:

Autosomal testing (the Ancestral Origins test) makes very recent historical comparisons, matching you to people that have also been tested. We use several databases that in total comprise about 10,000 individuals. Each of the coloured icons on the results map represents a large number of individuals, and not a single individual who happens to share common and uncommon alleles that are matches to yours. Again, this test is dependent upon tested individuals.

We have found that this test will accurately report recent shifts, inside of the last 10 or so generations, but is not able to reflect an ancient migration. If your interest lies more with ancient ancestry then one of the Y-STR, Y-SNP (which would require a sample from a related male individual) or mitochondrial products detailed below is a better choice.

In summary, the Ancestral Origins test is more of a close-in look at tested people living today and how similarities in their genetic profiles are distributed across the globe. It is more focused on recent common ancestors and relatives within the past 5 to 10 generations.

Y-STR testing looks for more recent mutational changes that have occurred in the last several thousand years (the last 10-20+ or so generations). This has proven to be of great utility in use with Surname Projects, where we are looking for common ancestry along the paternal lineage. It is also possible to estimate Y-Haplogroup information from Y-STR data.

*For more information about Haplogroups, see the section below.

This form of testing relies on a few hundred single point mutations that have occurred over the past 50,000 years, and seem to have significance for large group shifts of massive populations of people. On the chart below, each of the branches of the Y Haplogroup tree can be identified by specific SNP mutations which allow us to trace back migrations of large groups of our ancestors. A very informative site that describes the “Journey of Mankind” can be found at a website from the Bradshaw foundation. 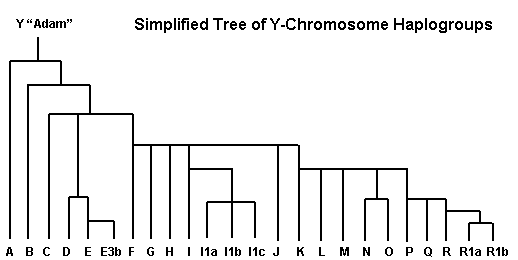 Maternal Lineage DNA Testing uses mitochondrial DNA testing (mtDNA) and traces the maternal line back some 150,000 years. The mtDNA comparison DNA test, also known as a maternal lineage test, can confirm your relationship to long-lost relatives and ancestors through the maternal/female line. The maternal inheritance pattern of the mtDNA has important significance for ancestral studies. While most of the other types of DNA in our body are mixed as they are passed down from generation to generation, the mtDNA remains virtually unchanged because it has a strict line of descent from mother to child. This means that our mtDNA is the same as our mother’s and our mother’s mother’s mtDNA from hundreds, even thousands of generations past. By testing our own mtDNA, we are in fact able to indirectly read the mtDNA genetic code of our own maternal ancestors from hundreds to thousands of generations ago. 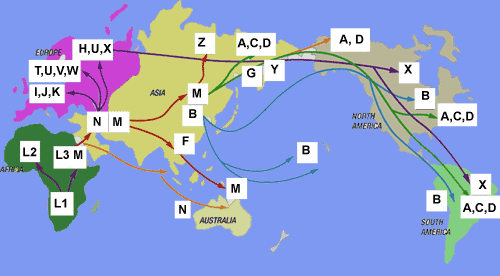 *For more information about Haplogroups, see the section below.

A haplotype is a collection of specific alleles (particular DNA sequences) in a cluster of tightly-linked genes on a chromosome that are likely to be inherited together. Put in simple words, haplotype is the group of genes that a progeny inherits from one parent.

There have been a large number of studies of Ashkenazi Jews in the past 20 years utilizing Y chromosome and mitochondrial DNA. Much of this work has been done by Dr. Hammer at the University of Arizona. An excerpt of some of this work is as follows, “A study of haplotypes of the Y chromosome, published in 2000, addressed the paternal origins of Ashkenazi Jews. Hammer et al. concluded that the Y chromosome of most Ashkenazi and Sephardi Jews contained mutations that are also common among Middle Eastern peoples, but uncommon in the general European population. This suggested that the male ancestors of the Ashkenazi Jews could be traced mostly to the Middle East. The proportion of male genetic admixture in Ashkenazi Jews amounts to less than 0.5% per generation over an estimated 80 generations, with “relatively minor contribution of European Y chromosomes to the Ashkenazim,” and a total admixture estimate “very similar to Motulsky’s average estimate of 12.5%.” However, when all haplotypes were included in the analysis, the admixture percentage increased to 23% ± 7%. Hammer et al. add that “Diaspora Jews from Europe, Northwest Africa, and the Near East resemble each other more closely than they resemble their non-Jewish neighbors.” In addition, the non-Jewish components in Ashkenazim and Sephardim are generally South European, specifically Greek.”

In summary, looking into one’s ancestry can be an enjoyable hobby, and there are several products that will give you different looks at close in and ancient connections to your ancestors.

We hope this explanation has been of some help. Please do not hesitate to contact us with any questions.